Although racists and discriminatory groups have become increasingly vocal in Canada since the election of U.S President Donald Trump, Canadians are defying the rise of hatred by building bridges and alliances between diverse communities.

For instance, groups as varied as Black Lives Matter Vancouver, Latinos in Action, Radical Desis, and the Vancouver Taiko Society are among those who are sponsoring the International Day Against Racism March in Vancouver on Sunday (March 26). The Japanese Canadian community, which has spoken outagainst Islamophobia, invited the Turkish Canadian community to celebrate spring together this year.

Now, the Sikh and LGBT communities are joining together in a momentous partnership to celebrate the historical Sikh spring festival Vaisakhi for the first time. 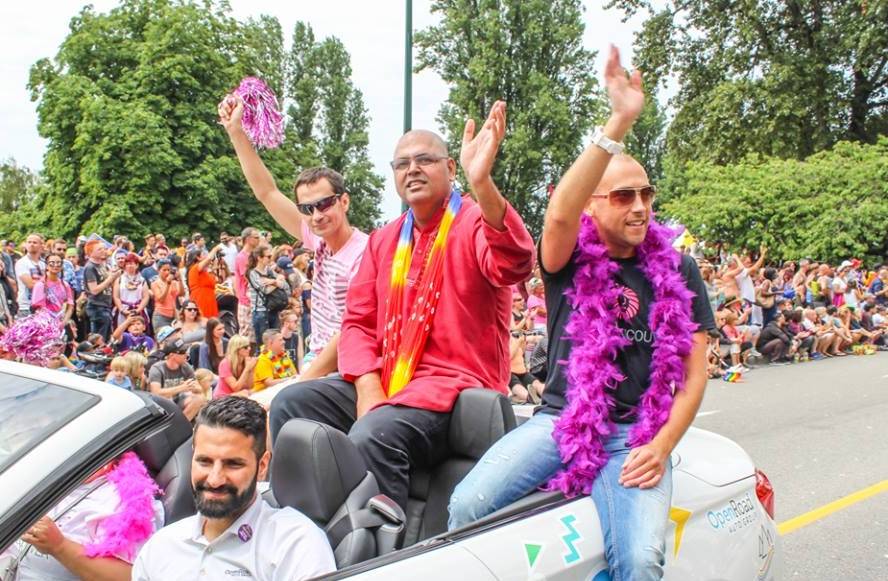 The Khalsa Diwan Society, which holds the festival, invited Sher Vancouver, a social and support group for LGBT South Asian people, to participate in this year’s parade.

Sher Vancouver founder Alex Sangha said by phone that this move is a “huge step forward” and that “people don’t realize how big of a deal this is for the Sikh and South Asian community”.

Khalsa Diwan Society outreach coordinator Pall Beesla explained by phone that this development had its roots in attempts to make Vaisakhi more LGBT inclusive that began in the previous year.

Beelsa said that he is a member of the bus driver union Unifor Local 111, which has an LGBT committee. Last year, a small contingent of three members from that committee participated in the Vaisakhi parade. Sangha added that the union also donated $2,000 to support a documentary about Sher Vancouver’s former member, January Marie Lapuz, who was murdered in 2012.

Beesla spoke with the Georgia Straight about how the work that Sher Vancouver is doing aligns with Sikh philosophies about social justice. A key tenet of Sikhism, Beesla explained, is equality between all people from all walks of life.

“It only makes sense for us as a non-profit to support a non-profit that’s doing good work, regardless of what that work is,” Beesla said.

Accordingly, Beesla said it’s important to address misconceptions about those who are different, whether to do with race, culture, disability, sexual orientation, or other identities.

“We have to use these events and platforms we have, whether religious or cultural, to counteract these misconceptions, to counteract…hate,” he said. “Awareness is key to combating misinformation….The only way we can combat hate is with love and unity.”

He added that because love and compassion are important parts of the Sikh faith, he felt it was important “to stop preaching it and…to start practising it”.

Sangha said that there is actually nothing in Sikh scripture that discriminates against LGBT people, but prejudice has arisen in practise due to influences such as machoism.

(Anti-homosexual legislation was introduced to India in 1860 during British colonial rule. Although that was decriminalized in 2009, it was reinstated in 2013.)

Beesla affirmed that because Sikh scriptures teach them not to discriminate based on things such as “race, colour, creed, socio-economic status”, he says it’s a logical conclusion to apply that philosophy to include LGBT people.

So far, he hasn’t received any criticism or backlash. But he added that he’s not afraid of facing any opposition as he cites a phrase in a Sikh hymn: “without fear and without hate”.

“To be scared is to have done any cause an injustice,” he said. “Our faith teaches us to fight against injustice, very boldly and courageously.”

He added that he thinks many people express discrimination, often indirectly, from positions of weakness or insecurity.

“It’s time to combat those who hide behind a keyboard or…hate from a distance and we can combat that by showing that they’re outnumbered, that there’s more love than there is hate and that will one day eliminate that hate.”

Drug Abuse And Meth Abuse In The Gay And LGBT Community